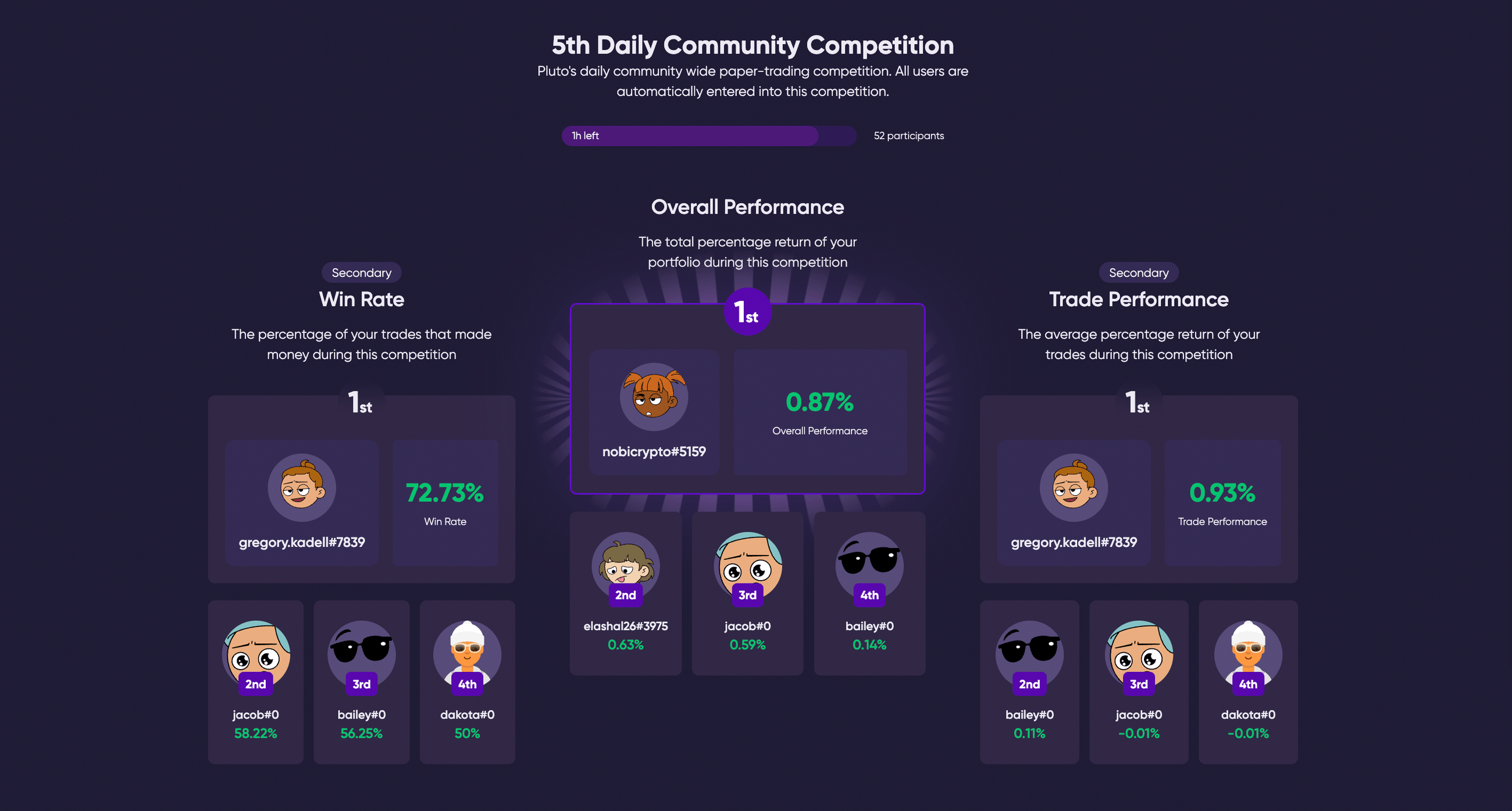 Welcome one, welcome all, to this very special press release about our upcoming Paper Trading competition! …What’s that? In the few days in between getting told to write this up and now, two other bombshell-ish feature sets got added to the app? …So, this is a full-on dev update too? …Come again? You say I’m talking to myself? …I see. WELL THEN! It seems we have a dev update on our hands! We know how much you love them, and wasting your time is actively harmful to a reader’s experience in every way but word count, so buckle your seat-belt adjacent straps, here we go!

In the spirit of good fun and community, in the service of outreach and showing off our developmental ambitions, and in the wake of one of the most interesting market periods I can think of, we’re hosting and organizing our very own paper trading competition to see who can make out like bandits with fixed (and luckily for most, fictional) dollar amounts, and put their strategies through the wringer in the great many avenues of algorithmic trading. There’s a bit of a quirk though, in that some strategies that might be great for the paper trading competition would absolutely bomb if sold on the marketplace. For now, all we’ll say is that in the future, competitions are going to be fine-tuned to look a lot more like what’s going to fly on the marketplace (when that makes its official debut), so that even if you aren’t planning to be an active user in that space, you’ll get a sense of how our flavor of fintech magic feels.

This competition won’t just be about who can make a line go up the highest, though. We’ve got several categories for all sorts of winners, because there’s more than one way to beat the market, and we know that not everyone is going to value the same things in their portfolios. Just as a quick sample, there’ll be highly visible leaderboards for overall performance (that’s your main competition podium), strict win rate, and trade performance. Hell, we might even add more! (Dakota: “Please don’t make promises on our behalf that gives us more work.”)

This is also going to be the first set of *many* competitions we host. Right now they're iterating every 24 hours, but we plan to start running them for even longer to see who can win in a marathon. We think that these sorts of events are great ways to link people up, encourage friendly competition, conversation and improvement from all the numbers nerds out there that might otherwise keep close to the chest. More than any simple finance product that provides nominal aid in the day to day, we see this as an extension of the humanist philosophies that guide us here at Pluto… I had to stifle a laugh while writing this at how corny that sounded, but it’s true. We genuinely believe in the community we’re building and that like any community, they’ll bring each other up. That starts with these competitions, and we hope to see you on the charts!

As always, app.plutohq.io to check out the competition for yourself, and we hope to see you there!

Profiles! Okay, this one isn’t new, buuuuuuut, if you used it before, you’ll realize why it deserves to be talked about again. It feels like new. The mood of the week was to drastically improve quality of life by introducing much more of the standard package, as it were, and boy have we. Three big things were missing that usually define profiles for users of anything. Avatars(and other unique signifiers), the ability to seek out and add new friends, and a robust notification system for all things related. But those things alone aren’t usually worth a mention. How we implemented them, however, is.

As our first “implementation” of profile pics was really only for if you had a WordPress account with our company domain’s email, that obviously wasn’t gonna last. Now, we have something far more exciting: procedurally generated profile pictures! And you don’t even have to pay for them!! Imagine that!!! In all seriousness, there are dozens of sets to choose from and they are so much better than I gave them credit for internally when we were going over the idea in our heads. It took me maybe 5 or 6 clicks with one set to find an avatar that looks like Saitama, so like hell if I’m ever changing it. Caroline was picky and took about 30 clicks to find one she liked, which looks like Wonder Woman meets Steven Universe. They’re all awesome, and we know you’re going to love them.

But say you don’t love them. Don’t worry, you don’t have to have your mind changed just yet. User-uploaded profile pics will inevitably make their way to the site and will be used alongside the current iteration. There are big cost considerations for us that pushed us towards this solution, as well as a few moderation quirks, but ultimately, we think that most users are going to be more than happy with this. True digital uniqueness, as they say.

Achievements! This is the release I’m just oh-so excited about. As my baby idea from the early days of me being onboarded with the company, it was the sort of thing that had to take a backseat to the fundamentals. But now that we get to work on The Shiny, it’s my time to shine, as it were!

If you’ve ever played Minecraft, think that. We’ve started off by creating various trees that you can focus on, with the first and most immediate one to new users being the “Getting Started” tree, name to be changed when we think of something cleverer. (Side note, Microsoft Word has promised me that “cleverer” is a word. I don’t buy this 1984 doublespeak shit in the slightest, but I hate the blue underlines so much I’m willing to bend the knee. Cheers to that!) With multiple branching and converging paths to go down, it encourages you to reach out to all aspects of the site and gives you little OCD-curing blessings in the form of glowing lines. Something I think we can all relate to being enamored by more than once.

We plan to add so many more, and these likely won't justify updates in their lonesome, so all I can say for now is to stay tuned. That’s about it from me, and May the 10th be with you! Yes, this is an already out-of-season Star Wars joke. Just try and stop me!!!