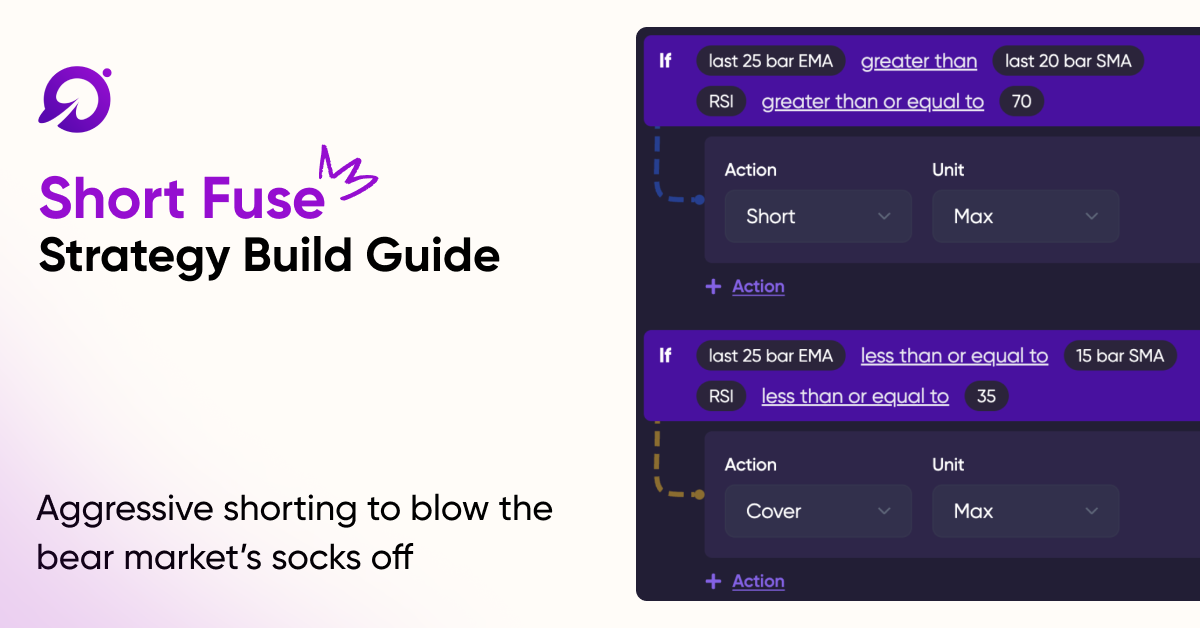 For those who keep up with my regular strategy builds inside the Pluto discord, you know that I love using the Exponential Moving Average (EMA). Short Fuse looks to utilize the 25 bar EMA by comparing its value to the Simple Moving Average (SMA). Short Fuse also looks to the Relative Strength Index (RSI) to gauge overall price momentum and better time position entries. To execute a short, the 25 bar EMA must be greater than the 20 bar SMA and the RSI must be greater than or equal to 70 (overbought territory).

Sweet, now we have the tools to open a short, how about to cover it? Short Fuse executes a short cover when the 25 bar EMA is less than or equal to the 15 bar SMA and the RSI is less than or equal to 35 (almost oversold territory). You may have noticed that position covers are taken with a tighter SMA, this subtle change allows the strategy to lock in gains on quick drops in price action.

Alright, so we know how the strategy opens and closes trades. Now we just need to know the background details.

During my backtests of Short Fuse, the assets I chose to trade were AAPL, MSFT, GOOGL and AMZN. All trades were executed on the 5 minute time frame and utilized all market hours. Obviously, short positions are turned on.

In this section I will review the backtest results of Short Fuse. The two backtests I want to explore are the Pluto scenarios "Year of 2008" and "Bull run of 2013."

The year of 2008 was extremely bearish as the S&P500 (my benchmark) returned -38.95%. When the entire market does this poorly, you can bet that practically any individual stocks during this time also perform poorly. The assets I chose to trade on suffered, managing to drop a staggering -49.55%. However, Short Fuse is incredible at posting gains during these market conditions. Here are the 2008 results:

You're seeing that correct, while the 4 assets I traded on lost ~50% this strategy returned 31.94%. Normally returns like this mean you are undertaking significant risk. In reality, Short Fuse maintained a risk score of just 1.46, 0.46 above the industry standard. This strategy is a monster in bear markets and really only falls short in the cash utilization section because it isn't always in a position.

Cool, this strategy is insane and will make us all rich right? Wrong. Aggressive shorting works out really well during a bear market but during a bull market? Here are the results from the bull run of 2013:

Ouch. Short Fuse can't handle bull markets meaning that well timed execution of this strategy is essential for your portfolios success. Missing the S&P500 by 45% is proof this strategy could never be used blindly without risking a huge amount of ones capital.

This strategy was built with the intention of profiting as much as possible from a bear market. As history shows once again, putting all your eggs in one basket can get you hurt. Using a strategy like this requires timing the market which is never recommended. However, it's likely that some careful changes can reduce the overall gains of a bear market and decrease the overall risk brought from a bull market. An important lesson to take from this is that you can almost never have one without the other. The best market strategies are ones that perform in a consistent manner during all market conditions. Risk management is everything when you have everything to lose.

Play around with Short Fuse inside Pluto's strategy builder and let me know what you think! Definitely a lot of potential here!