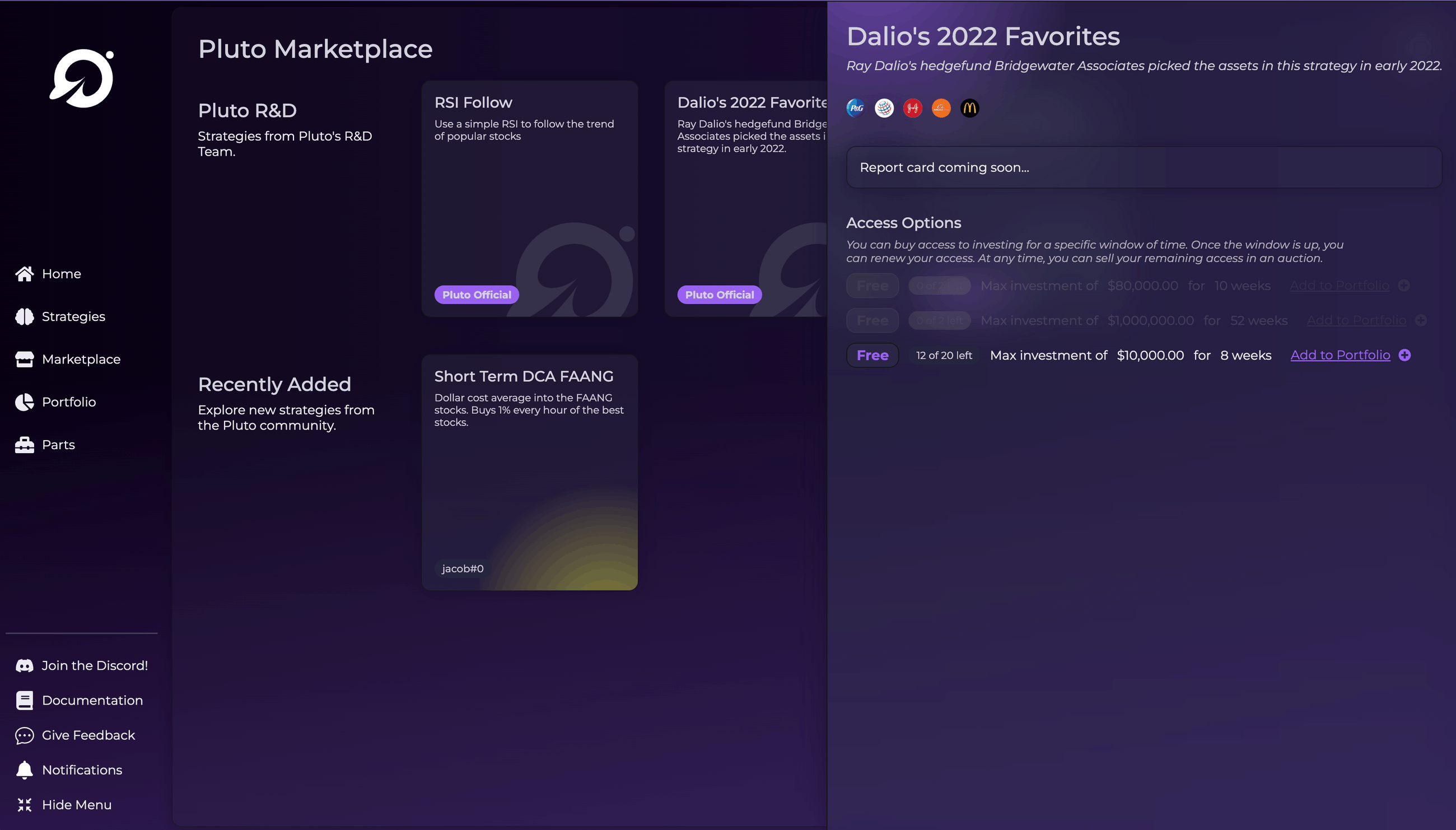 And so, it is with heavy heart that I announce that the development team officially work faster than I do. It’s a real shame, too. Granted, I could give myself a mulligan and say it’s because I’m on spring break, but that’s lame. The grind stops for nothing and no one, and rest assured I’m not stopping either!

The Marketplace. We’ve had a beta version of our newest feature, a market for trading the strategies you make with other Pluto users, live for about a week now, so I think it’s worth diving into detail as to what it means for you. Pluto, as it stands right now, is Not A Brokerage. You all got here and are probably aware of that, but for the two of you that aren’t, there you go. Key phrase is “as it stands right now,” because Jacob is working day and night to get us there. “Okay, but why are you mentioning this right now?” Great question, dear reader. Because of this, our monetization options right now are basically zero. But that isn’t to say we don’t have a service. Pluto started with our kernel of algorithmic strategy creation, and fundamentally, that is what we always are and will be. Among other things to come. And as a product that is so intrinsically tied to finance on the whole, it is foolhardy to picture that product without its own statement on commerce. So the next step, as our community grows and has shown itself to be more than capable of self-assembling, is to provide them that next dimension into commerce.

Strategy development is one thing, but why keep those cards to the chest if you have something other people are gonna want? That’s what we think so many of you guys are going to get a kick out of: fine-tuning strategies and shuffling those around between other Pluto users. Not everyone is going to be on the same skill level, some people are going to be better at Python than others, and some people just aren’t going to be able to put in the time and effort to fine-tune something that works for their end goals. Furthermore, our profiles should mean something to everyone who joins, at all skill and income levels. This levels the playing field and provides a whole new dynamic to Pluto that we think you’re going to love. So let’s go over what we’ve got!

First, some freebies! If you don’t intend to spend a dime on anyone else’s strategies, the marketplace will still have a few options for every Pluto user to start out with and add to their portfolios. See a few names you recognize? Well we aren’t *exaaaaactly* in contact with either Warren Buffett or Ray Dalio, but that didn’t stop us from making a few strategies based on some of their seminal investing advice to give to y’all. Plus, a really solid RSI following strategy that is bound to make at least something with no modifications whatsoever.

Next, the thing we will have an implementation for Soon:tm: is featured profiles/strategies from some of the platform’s top creators. For people whose strategy creation starts to get notorious in the Discord (hint: start posting your stuff to #pluto-builds if you wanna be one of them :D), their work can be placed front and center for prospective users to look at and potentially gain access to. For people who will see Pluto as a means of content creation, this is perfect.

So this is lofty as hell. And also introduces a lot of legal problems that make my law school brain go “hmm” at the company meetings. So as for how it actually works, functionally? This is where we get creative. The creator of a strategy or strategies will, in order to show authenticity, mint an NFT to grant access to an end user. They then give knobs and buttons and levers to whoever wants it, all within the confines of “Their Strategy.” A small auction gets held and sells the strategy to third parties. Buying access to the strategy will be done at scale, and can be transferred around like any other NFT. The creator gets a cut of each transaction and their hard work is then monetized many times over.

But you wanna know the coolest thing? Here’s the deal: I (the guy writing this) am on the skeptical side of crypto. Still not a true believer. Might ruffle some feathers in here, but best to be honest and say I’m still not entirely sold on it as a future technology I want or need in my life. But this whole thing with the marketplace? It is both functionally impossible for us to do without utilizing crypto, but that use will be essentially invisible with an end user. The seediest elements of this space I still distrust aren’t just absent, the actual goal of the marketplace is the sort of thing Web3.0 evangelists want so badly to be commonplace, and actually starts delivering on the promise of decentralized finance, rather than… the lazier road that many in this space have seen fit to roll out the red carpet for.

And that’s basically it! See ya round, cowboys! Hope your brackets aren't busted quite yet!