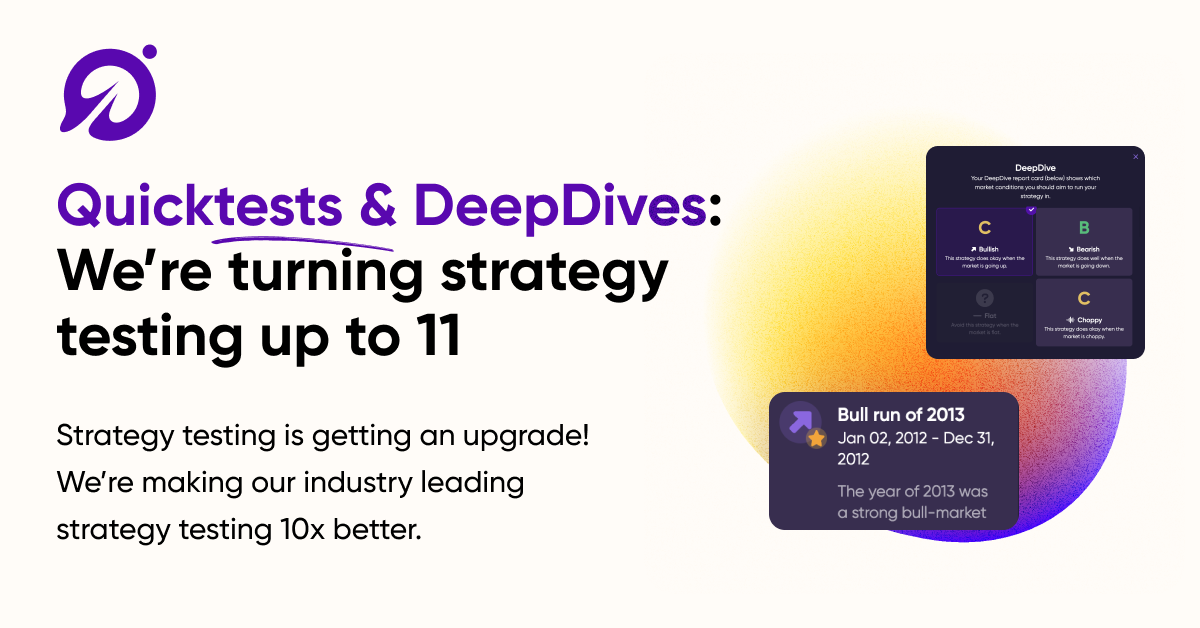 Another update, another rousing meeting with the team to see what’s been on their minds and on their screens. As we approach several big milestones across the board, it’s only fitting this update takes us back to the very most basic. Iteration by iteration, we strive to put out a better product than ever before, and never has that been more true than here, with our biggest and most granular patch yet.

Perhaps it's because I'm sentimental, but I first want to talk perspective before I talk shop. Strategies themselves are the core of what makes us Pluto. It's the first big piece of functionality we ever got working, with a very different working environment, far fewer employed people, and a more humble origin story that I've seen play out from well before what most people would typically call a company origin story. But in deciding where to distinguish between the origins of my good friends making Pluto and the origins of Pluto itself, I'd say that the proof of concept for our strategy builder was a defining moment in our very first chapter. This was what took the application of some simple stock tickers and home-brewed information graphics into a product we could thrust into the world beyond our four walls. It has always been, and will always be, strategies. So when I say that the Strategy page of today is important to both the development and the story of Pluto, I mean it.

So with the sappy stuff out of the way, I give you: the new and improved Strategies!

Now, from the top. What's new? Well first off, from a UX perspective, strategies aren't taking a new approach, but rather one that's always been implied but never fully realized. Strategies are meant to be a user's living document and a testament to how they think and feel as a trader. So why is it that they were so regimented beforehand? Each time you created a strategy, and every time you wanted to update, your changes would in essence take you back to square one. Change the parameters slightly, do the tests over again, compare and contrast. To even compare the two versions side-by-side was clunky and garnering information was piecemeal. Now? The process of strategy creation is such that your goal remains a fixation from start to finish.

How does it do that? Simple. Treat each strategy as its own session, with its own window in time and results tailor made for you. Now, when you first create your strategy, you aren't expected to strike gold on your first few hits. It's a process, and a love for it at that, that is going to be a driving force for creativity and strategy solutions that we haven't even thought of yet, because it's all going to come from our users. In the service of this, our sidebar now has our handy booklet icon, which will expand all the versions you've created in the past, keeping track of how they did and letting you expand on which versions did great and poorly to see how you can keep on changing.

Quicktests are also receiving a generous amount of love, in ways both expected and unexpected. First, a word on performance. It'll all depend on the computer that's running it, your browser cache, and your upload/download speeds, sure, but in our testing, a loaded strategy's quicktest can now load for end users in just a few seconds. With the work we've put in to front-load as much of the historical data and loading as we have while still trimming down overall load times (a constant game of tug-of-war we aren't sure we'll ever win but are quite sure we'll never quit), any and all of your retesting of specific scenarios will be kept at your fingertips, nary a load time to speak of if we get this right.

Hand in hand with our quicktests are overhauled custom scenarios! Receiving all of the boosts in performance that quicktests do, with the simplicity of our blocks editor, you can create your own scenarios for your own needs, all with just a few clicks. Far be it from the days of having to snake through the program, they're as important to us now as they ever have been, and a good thing too! The market's always changing, and if you're as plugged in as some of us are, there's historical data you're going to want to have on hand for yourself, and this gives you the power to access it for no extra effort at all.

And last, but perhaps most strikingly, Deep Dives!

These aren't your ordinary backtests. These are the extremely detailed, no-holds-barred backtests that will take longer and give you even more for your time, and it's a huge part of what makes Pluto's new strategies that much more enticing. With each request, you're giving us the okay to peer far further back into the vault and bring you more information than you'll know what to do with. Working on a timeline of decades as opposed to months, with a greater amount of tickers, Deep Dives will happen in the background and let you continue on with your happenings on Pluto, all while they chug away. These can take upwards of 30 minutes, and that's very deliberate. They are your ultimate grader, taking every possible scenario and giving you a score. And once you've got your Deep Dive? You have it on hand forever. That information is yours. Always in your strategy, always handy to compare back to. It isn't for the faint of heart or for the strategy you came up with in 30 seconds. If you're rolling out a strategy meant to give you long-term investments and giving it the power to make trades on your behalf as such, there is no greater peace of mind. And it's just one of the many ways Pluto intends to shore up and legitimize algorithmic trading. Too often, when we entrust pieces of our lives to machines, we don't bother to peer under the hood. Now, you'll never have to guess.

And that, my friends, is Pluto going full circle. 👋